Where can I find my version number?

The number for your copy of GoZync can be found on the bottom edge of most layouts in GoZyncHosted. You'll also find a field called GoZyncCodeBase in the Interface table of the hosted and mobile files.

What is the latest build of GoZync?

Build 5.09 (Jan 28, 2017) Improves the handling of timestamps when users are encountering different date formats between files.

Instructions for making the 5.09 updates in your GoZync files can be found  here.

• Fixed a false 101 error that could appear when syncing related records.
• Fixed a rare case issue that could delete child records in the mobile file, when multiple tables are configured with the same parent table.

Instructions for making the 5.08 updates in your GoZync files can be found  here.

Build 5.06 (Jan 16, 2015) Fixes a bug that caused a sync failure when pulling a large number of records (~25,000+) using PSOS, added an iPhone "Downloads" layout in GZH, new feedback form upon closing in GZH. For a complete list of the changes in 5.06 and instructions for updating your files, click here.

Build 5.05 (Nov 4, 2014) improves testing of your sync configuration prior to deployment, and fixes a bug that was preventing related records that had been deleted in the hosted file from also being deleted in the mobile file. Instructions for making these simple updates in your GoZync files can be found here.

1. In your hosted file, find the script "Get IDS Needed For Sync PSOS" and remove the line shown here (this is redundant and not needed). 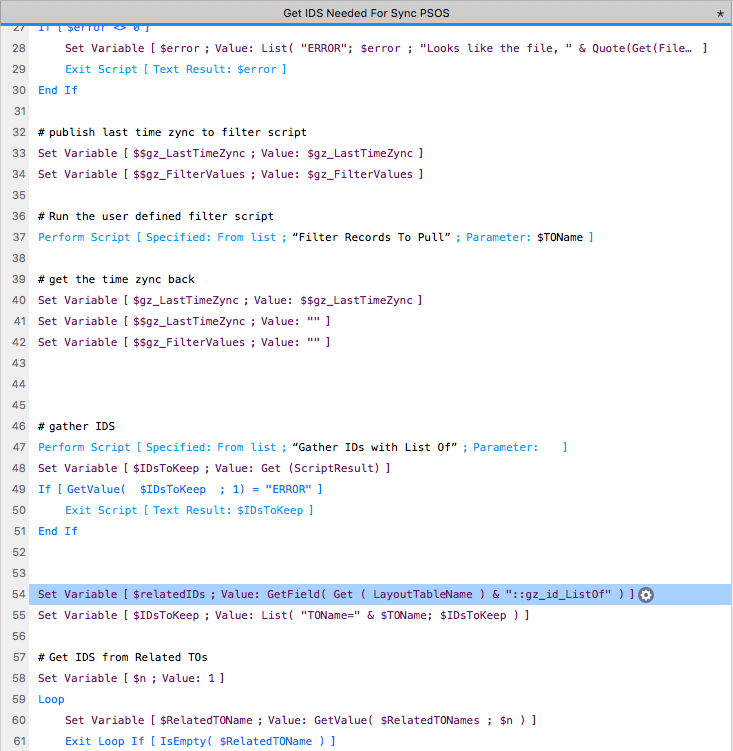 2. (If you've already integrated GoZync you've likely changed / fixed this one.) In your mobile file, find the script "Zync - Is a new version permitted." And make sure that the GoToLayout step at the beginning of the script (or at the beginning of each Find section if you have more than one parent table) is going to a "real" layout, not an interface layout. For example, we used to have this script step going to the "Work Orders Interface" layout when it should have gone to "WorkOrders"--where the data is.

Build 5.0321 (August 7, 2014) fixes a bug where we were testing for debugging improperly and thus never running in PSOS mode (ie running slower). Easy fix for faster syncs in v5 the line to change is in the script "GoZync Call from GZM" in your hosted file:

Build 5.032 (August 4, 2014) fixes a bug in one of the scripts you import into your hosted file. This is an easy fix and instructions for making this change in your copy can be found here.

Build 5.03-5.031 (July 9, 13 2014) We'd left layout access out of the administrator privilege set in GoZynHosted (GZH). =( This version adds that back in so you can edit layouts in GZH, it also adds a "Manage File Options" script so you can change the default login and security for GZH.

Folks who need to edit layouts and security in GZH will want to  download the latest version and replace their copy of GoZyncHosted. This file is where your license is stored so you'll need to enter your license again: very sorry about that.

There is also one small change in GoZyncMobile, which is necessary for the file-update mechanism to work correctly. Edit the If[Get ( LastMessageChoice ) = 2] condition in the "Finish Sync" script so it looks like this (the second line is new):

Build 5.02 (July 4, 2014) Fixes a couple bugs when GoZync tried to check your work--specifically when it tried to check the GTRR script you edited in your hosted file. These bugs didn't affect the sync but threw some false errors when clicking "refresh" from the configuration tab in GoZyncHosted. We fixed these by adding some much nicer error capture to that checking-your-work routine: we recommend this update for all 5.01 users.

Making the 5.02 changes in your copy.

Version 5 is a paid upgrade available to licensed users of any prior version of GoZync. Learn how to  migrate your deployment to GoZync 5.

Docs for versions before GoZync 5 can be found here:  GoZync3 or GoZync4.