Authentication (Files on your iPhone or iPad)

It is up to you to decide if you want to require users to authenticate into your mobile file on their iOS device. Many developers will choose to use an auto-enter account and password so local users won't be asked to authenticate each time they open the mobile file. This makes more sense in synced files than others because a) the file often doesn't have any/much data in it, b) you can instruct users to secure the devicewith strong passwords, instead of securing the file, and c) the mobile file has no account information (no access) for the hosted files.

If you're concerned about theft of the mobile device, check out the Remote Wipe available here: http://www.apple.com/ipad/built-in-apps/find-my-ipad.html Note that you can also turn off "simple passcodes" in your iPhone or iPad's settings to use longer, more secure device passwords.

Users will also be asked to authenticate each time they return to an open mobile file (such as after switching away to another app, or after closing their iPad) unless you use the fmreauthenticate extended privilege to control when users will be required to reauthenticate after not using FileMaker Go for a specified period of time. You'll likely want to add this to the privilege set in effect on your iOS Devices.

Our Recommendations: Your Mobile Files

So here are our recommendations for securing your mobile files (you can do this to GoZyncMobile as well if you wish).

Secure your iOS device with a passcode.
Create an upon opening script in your file that uses Get ( ApplicationVersion ) to test if the user is on FMGo or FMPro. Run this script with Allow User Abort Off.
If they are on Pro, call the relogin script step with NO options so they need an account to use the file.
If they are on Go, call the relogin script step using an account that lets them do their work but is NOT shared with the hosted solution.
Use the fmreauthenticate extended privilege to control when users will be required to reauthenticate after not using FileMaker Go for a specified period of time. The number after fmreauthenticate indicates how long, in minutes, the user can go inactive without having to reauthenticate: fmreauthenticate0 means they would have to reauthenticate every time they come back; fmreauthenticate120 would let them stay away 2 hours before they'd have to log in again. See  FileMaker's Go Development Guide for more details.
When users go to sync they will be asked to log in to GoZyncHosted, and will then do so using an accounts shared with the hosted files... (see the next section)

mothership" files) at the beginning of a sync session. This is when users will be asked to log into your solution.

Our Recommendations: Your Hosted Files

You really don't need to secure your files any differently than you do now: syncing users will be asked to authenticate when they sync begins and if their login fails the sync will abort.

GoZyncHosted doesn't have any file references to your hosted solution (your "mothership" files) but it does contain your configuration instructions, so you don't want just any user messing around in there. We've created two privilege sets in GoZyncHosted: "Administrator" and "Sync". Administrator lets you admin licenses and devices, and and "Sync" is a lower level access that lets users sync but not change the sync settings. We recommend you default GoZyncHosted to the sync privilege set, and then log in as an administrator user when you want to make changes to the sync settings.

To do this, open GoZyncHosted and run the script "Manage File Options" from FileMaker's Scripts menu (you'll need to be logged in as an administrator). The under the "Open" tab, enter the default Account and Password for the "Sync" privilege set: both of which are "Sync": 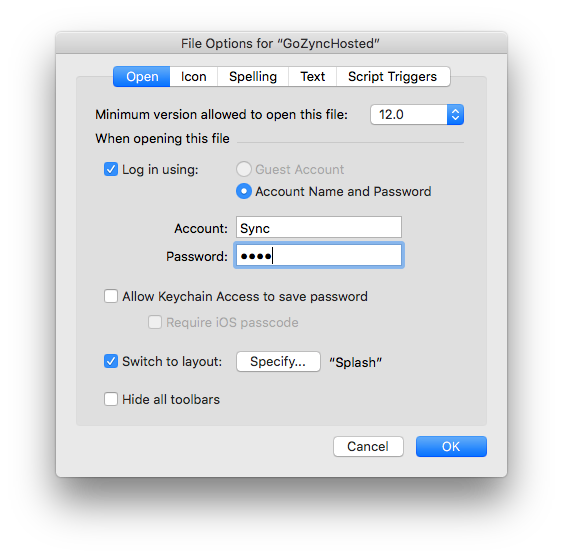 So in this ideal setup it would look like this:

Your Data in Transit

Does our data pass through Geist Interactive's servers or through any web applications?

GoZync doesn't send any customer data (FileMaker records) through our servers during the sync: the only communication during a sync is between your customers' mobile file and their hosted file. And that's all done over FileMaker networking using FileMaker Scripts.

GoZync only uses Geist Interactive's servers in a couple instances and none of this involves your data:

1. When you're on the GoZyncHosted home layout, it reads a file from our server to learn what the latest version of GoZync is. You can remove that webviewer to disable this if you'd like. Similarly you can remove the links to GoZync news on the file's "About" tab.
2. When you first enter your GoZync License into GoZyncHosted it checks that license code against Geist Interactive's server to make sure the license is valid. That only happens the one time, not every sync nor every so often.
3. When the mobile file starts the sync it attempts to download this file... "

Check Network Connection" in GoZyncMobile and you can replace that URL with a file on your own server if you prefer.
Last updated on August 15, 2020